The need to interface and exchange information through these open APIs will allow competitive offerings for Consumers, Enterprises, and Vertical Industry end-user segments. For instance, open APIs will be provided between Telcos and public cloud edge compute platforms such as Google Cloud Platform (GCP) Anthos, AliCloud Edge Node Service (ENS), AWS Wavelength, Microsoft Azure Edge Zones, Tencent Edge Computing Machine (ECM), to name a few. These APIs are not limited to providing basic connectivity services but will include the ability to deliver predictable data rate, predictable latency, reliability, service insertion, security, AI and RAN analytics, network slicing and more. These capabilities are needed to support a multitude of emerging applications such as AR/VR, Industrial IoT, autonomous vehicles, drones, Industry 4.0 initiatives, Smart Cities, Smart Ports. Other APIs will include exposure to edge orchestration and management, Edge monitoring (KPIs), and more.  These open APIs will be the foundation for service and instrumentation APIs when integrating with public cloud development environments and will be defined as part of the implementation. Even though these APIs will be common across all Telco operators, the differentiation will be based on services provided through those APIs.

The purpose of this blueprint family is to address all aspects of API interoperability to include API definition, API gateway functions (AAA, policy, security) so as to offer a secure, controllable, traceable, scalable and measurable way for accessing APIs by public edge cloud service providers.

The partnership announcement between AWS and Verizon/KDDI/SKTelecom/Vodafone during last November's AWS re' Invent signified the official entrance of Hyperscalers into the edge domain. Over the last 12 months, AT&T has announced partnerships with the big 3 Hyperscalers (AWS, Microsoft Azure and Google Cloud). In Asia, similar partnerships have formed between China Mobile and Tencent/Alibaba. It seems that after years of exploration, the edge domain sees a viable business model where Hyperscalers bring in applications and end-users, while the mobile network operators leverage their edge capabilities and locations.

Telcos and Hyperscalers are powerful in their respective domains. How would their partnerships work when they meet at the edge? What would be the technical collaboration interfaces? Within each country, usually there are M operators with overlapping coverage and N Hyperscalers serving the same areas. With this M to N mesh relationship, would it make sense to have common interfaces? Hyperscalers are big on APIs – how would Telco network edge capabilities be exposed as APIs? There are many questions with no ready-made answers. Needless to say, the business relationships of all Edge players are equally important in this domain. Telcos and Hyperscalers both carry their own eco-systems. How these eco-systems would collaborate poses another challenge.

This blueprint project family intends to help find these answers. The project will showcase collaboration via case studies. Meanwhile, broader discussions will be held with telcos and Hyperscalers during the project phase. With the massive deployment of 5G in the coming years, Edge is not only a location play but also a network capability play. In order to promote a rich application developer ecosystem, Telcos will need to expose network capabilities in a synergistic manner to public edge cloud service providers and other third parties to deliver value to the application developer and end-user segments. The game for Telco Edge starts to get interesting. 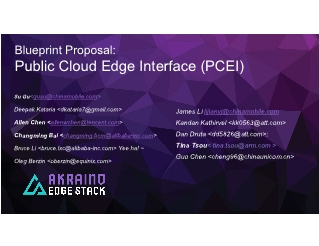 As per the Akraino Community process and directed by TSC, a blueprint that has only one nominee for Project Technical Lead (PTL) will be the elected lead once at least one committer seconds the nomination after the close of nominations.  If there are two or more, an election will take place.

Self Nomination began on 23 April 2020 and will continue until 29 April.

Oleg Berzin was the only person self-nominated.  Confirmation o