Can we get summaries on what's new with the existing BPs (Public Cloud Edge Interface, Smart Cities, ICN, Android Cloud, SmartNIC, Enterprise Lightweight Application for 5G MEC) so we can highlight in a blog post or PR? We will also need to update a slide deck for R6.

As a follow up to the R6 announcement, let's look to tie in Akraino examples as part of the broader LF Edge effort to publish user stories across projects. There is SO MUCH happening with Akraino and we want to be sure we are telling these super compelling stories appropriately. See the recent Fledge case study as an example of what we're trying to do: https://www.lfedge.org/resources/case-studies/.  Can we identify a handful of examples from Akraino that we can work into some similar narratives?

The Public Cloud Edge Interface (PCEI) blueprint continued development and integration of new capabilities into the multi-domain orchestrator to enable infrastructure orchestration and cloud native application deployment across public clouds (core and edge), edge clouds, interconnection providers and network operators. To do that, PCEI makes use of Edge Multi-Cluster Orchestrator (EMCO -the new LFN project) as well as additional components such as Controller Design Studio (CDS) and Camunda workflow engine. The notable innovations in PCEI are the integration of Terraform as a microservice to enable DevOps driven Infrastructure-as-Code provisioning, integration of Ansible as a microservice to enable automation of configuration of infrastructure resources (e.g., servers) and deployment of Kubernetes and its critical components (e.g., CNIs) on the edge cloud, and introduction of a workflow engine to manage the stages and parameter exchange for infrastructure orchestration and application deployment as part of a composable workflow. PCEI R6 can help simplify the process of multi-domain orchestration by enabling uniform representation of diverse services, features, attributes, and APIs used in individual domains as resources and data in the code that can be written by developers and executed by the orchestrator, effectively making the infrastructure orchestration across multiple domains DevOps-driven.

In R6, we introduce an innovative networking architecture based on PCIe data fabric to lower both the cost (CAPEX) and power consumption (OPEX) in small clusters for edge cloud computing. Based-on innovative data processor (DPU and XPU), the next-generation networking features with:

In R6, we introduced a cloud game solution based on robox, batch deployment through K8S, and monitoring and analysis of the built cluster system through promethus.

The current scheme has the following advantages:

The blueprint is designed as a simple to deploy and pre-tested implementation which can be built upon to create new edge services that make use of these technologies.

More information is available at the blueprint's wiki page and the Release 6 blueprint documentation.

Edge is becoming new norm enabling innovations across multiple industries. Akraino is a set of open infrastructures and application blueprints for the Edge, spanning a broad variety of use cases, including 5G, AI, Edge IaaS/PaaS, IoT, for both provider and enterprise edge domains.  These Blueprints have been created by the Akraino community and focus exclusively on the edge in all of its different forms.  What unites all of these blueprints is that they have been tested by the community and are ready for adoption as-is, or used as a starting point for customizing a new edge blueprint.

be built and performance evaluated in a short period of time, and new techniques can be used to improve the frame rate. GPU virtualization, and the use of the latest

armv9 architecture server chip, the cost of the entire solution will be greatly reduced. More information, please refer to:

Ysemi Computing was founded in 2020. The company's core team consists of core R&D and operation executives from first-class domestic and foreign companies such as Arm, Intel, Huawei,

and Tencent. Accumulated and rich experience in CPU research and development.Ysemi Computing is committed to high-performance computing and data center solutions to promote the

development of the cloud computing industry. Developing server CPU chips with improved performance, improved efficiency, and more scalability is the core goal of our team.

Deploying the game to the cloud requires evaluating the performance of the server and further optimizing and customizing the system platform. The usual forgame system

platform adopts the X86 architecture, and the open source anbox needs to be ported to the Android source code, but the anbox solution does not provide the supporting source code.

Anbox puts the android operating system into a container, abstracts hardware access and integrates core system services into a GNU/Linux system. Every andorid application will be

integrated with your operating system like any other native application.Whether it is CPU affinity, anbox customizability, batching, or system performance analysis, the deployment of

cloud gaming platforms is a time-consuming and labor-intensive process.

Robox is a cloud game solution developed by Huawei based on anbox. ysemi uses Robox to further improve and deploy robox to actual application scenarios. You can install and run

android apps on any pod. Robox joins the IEC Type3 project of the Akraino community, It is about android cloud native applications on Arm servers in edge for Integrated Edge Cloud

(IEC) Blueprint Family.In less than a month, Ysemi Test Lab successfully deployed their game software to the cloud platform using robox, and completed the evaluation of the performance

of multiple instances on the platform.Using the solution provided by Ysemi computing, Ysemi Test Lab has completed the deployment of more than 100 container instances in a cluster built

by K8S on multiple servers, and has the following functions:

When the game program is deployed to the cloud platform, the frame rate and network delay of the screen can be seen on the game interface. The displayed information during normal

operation is 1080p/30fps; when a single node  runs more than 20 instances, the interface displayed The frame rate starts to drop, and as the number of node  containers increases, the

frame rate drops to 20fps and below. The right picture is a screenshot of a single node running more than 20 container instances. 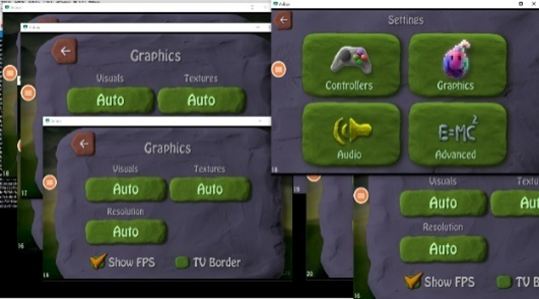 WHAT’S Next For Robox Cloud Gaming Based on ARM Servers

based on the source code.

The frame rate displayed on the system interface depends on the GPU. In this case, multiple graphics cards need to be installed on the server, and the relevant patches should be merged into

the system at the same time. In addition, the parameters in the deployed docker need to be configured accordingly. At the same time, Android and Linux can be updatedto the latest versions,

so that the hardware and software can be fully coordinated.

With the continuous breakthrough and innovation of GPU virtualization, core technologies such as 3D technology,image rendering and high-definition display will enable cloud games to

provide users with a high-quality experience. Using virtualization technology instead of mobile chip board on ARM serverwill reduce the cost of android platform. ARM server board also let

Fujitsu and Ritsumeikan are contributing to framework for fusion of robots and sensors.

Ritsumeikan's food prep and production use cases, as well as a range of robotics use cases in manufacturing, production, agriculture, and retail.

Robotics is an important tool for achieving the SDGs. Workers will be able to focus on decent work and new innovation by improvement of labor productivity using robot, as a result, they can move toward new economic growth. However, there are industries where it is difficult to apply current robotics. For example, agriculture, restaurant, food factory, etc.. The challenges current robotics faces in these industries are

Ritumeikan and Fujitsu research and develop enhancement of cognitive ability to solve these challenges. The features are the following three points.

The BP will allow robotic system integrators to easily implement systems that combine sensors and robots. We plan to enhance the following functions in 2022.

EALTEdge BP along with its upstream project EdgeGallery, provide an IOT stack which leverages Fledge(for IOT protocol and data collection) and eKuiper(Data Filter).

For using the EALTEdge Edge computing platform and  experience the profile based IOT solution, EALTEdge is deployed in LFEdge Lab.

User with right permission to lab, can connect and try it.

Details about use case:

In this demo, we use a sample simulated IOT device.

Data from Device is processed in pipeline in multiple stages like data collection from devices, data filtration and transformation then store in DB for offline scenarios.

Now IOT applications can access this data. It support http exporter to get data by application.

Application like grafana can get data from DB as well.

In this Demo, we are using simulated MQTT device which produce readings every seconds and processed data is visualise in Grafana to monitor the device.