The Smart Data Transaction for CPS (Cyber-Physical Systems) Blueprint implements methods to adapt the edge network, possibly dynamically, to reduce pressure on network bandwidth and expand the potential range of the edge network's reach while reducing power consumption. The two main features of the blueprint are data sharing between edge nodes and the addition of support for low-power radio connections to sensors. 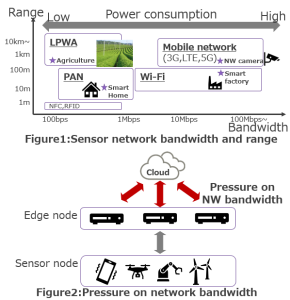 In Akraino Release 6 the Smart Data Transaction for CPS blueprint consists of a test implementation of these features based on EdgeX and Kubernetes technologies, suitable for evaluating the concepts and identifying future directions.

Below are some sample use cases which could benefit from the approaches implemented in this blueprint.

In a live event featuring audiences in multiple remote spaces, data can be combined by sharing between groups of edge nodes and sensors in each physical space. The combined data, such as video and audio feeds, can be integrated to provide a shared experience in a 3D virtual space to all audiences while reducing overall network bandwidth usage.

Widely separated sensor nodes can benefit from low-power radio connectivity to edge nodes, and edge nodes can react in real time to events in neighboring areas. The illustration below shows a storm drain monitoring application where, for example, sudden changes in water level can be used to trigger increased sampling rate in nearby sensors. 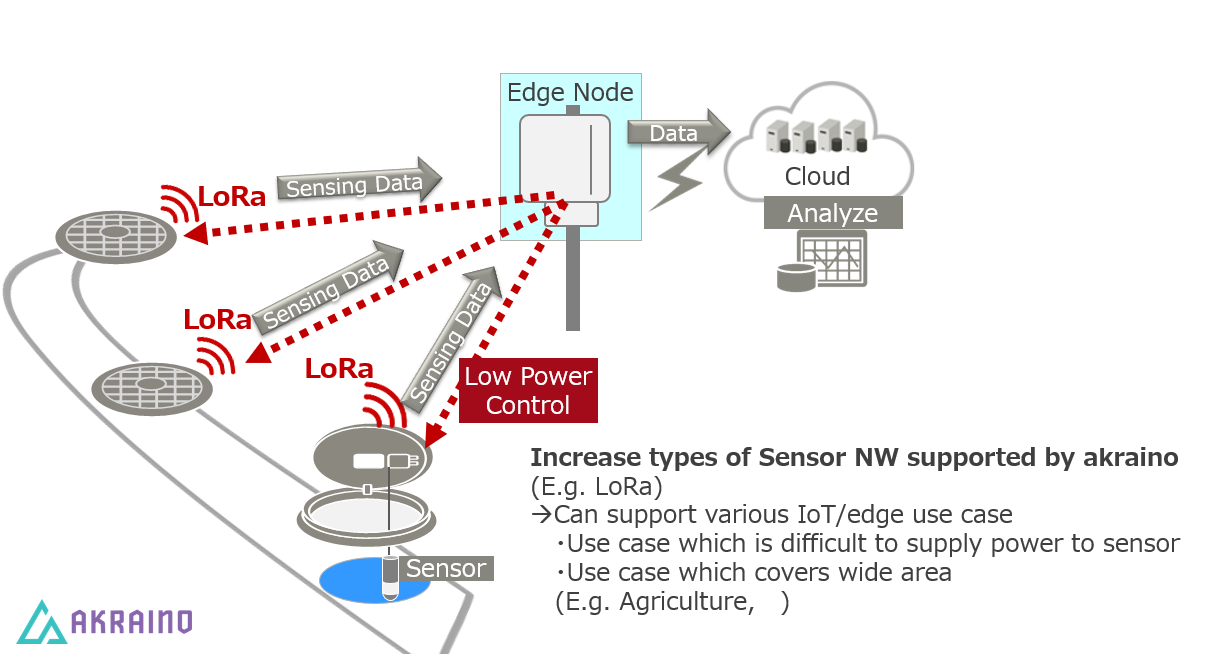 The blueprint is mainly focused on interactions between groups of smart edge nodes or gateways and sensors which can be grouped, either by physical location or by some other shared characteristics. The blueprint applies to situations where a large amount of data is generated from large numbers of sensor nodes, and which can benefit from localized integration and analysis of this data. Some such situations are described in the use cases above.

Cyber-physical systems (CPS), which combine sensor networks with computing to monitor and control the physical environment are becoming more popular each day. The bandwidth of the sensor network depends on use cases. Large amounts of data from large numbers of sensor nodes will put pressure on the available network bandwidth between the edge and the cloud. Therefore, we need to have a means to optimize bandwidth utilization according to use cases. This blueprint propose a solution for network bandwidth optimization through data sharing at the edge, also enabling a more responsive and smarter total system.

The diagram below shows the overall architecture of this blueprint. The colored components represent customizations or new implementations added for this blueprint. The details of the edge node and inter-edge data sharing are further illustrated below. 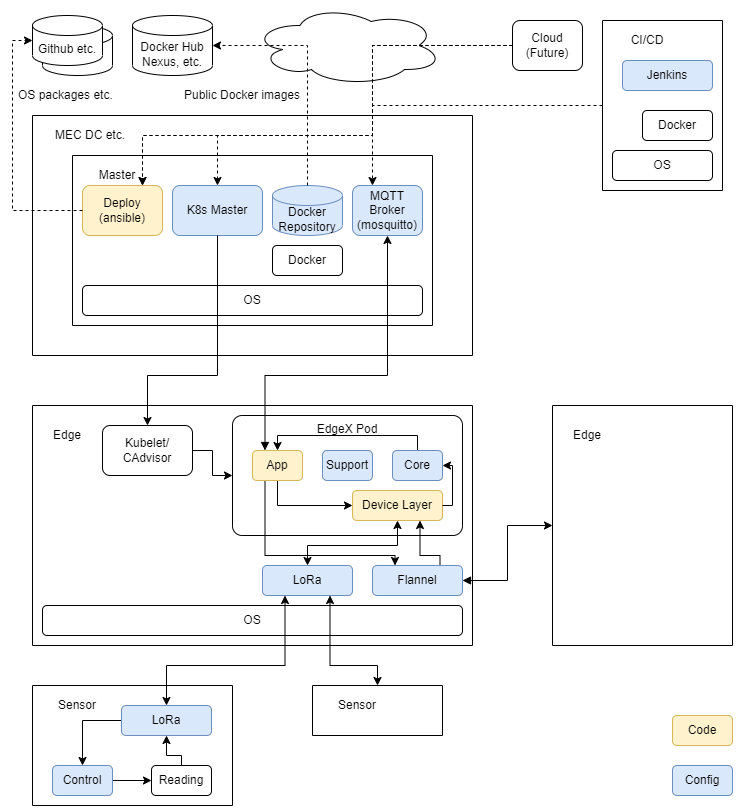 The Smart Data Transaction for CPS blueprint consists of the following types of node roles.

Some of the node roles can be combined on a single piece of hardware. For example, the "deploy" and "master" nodes can be the same server in practice. 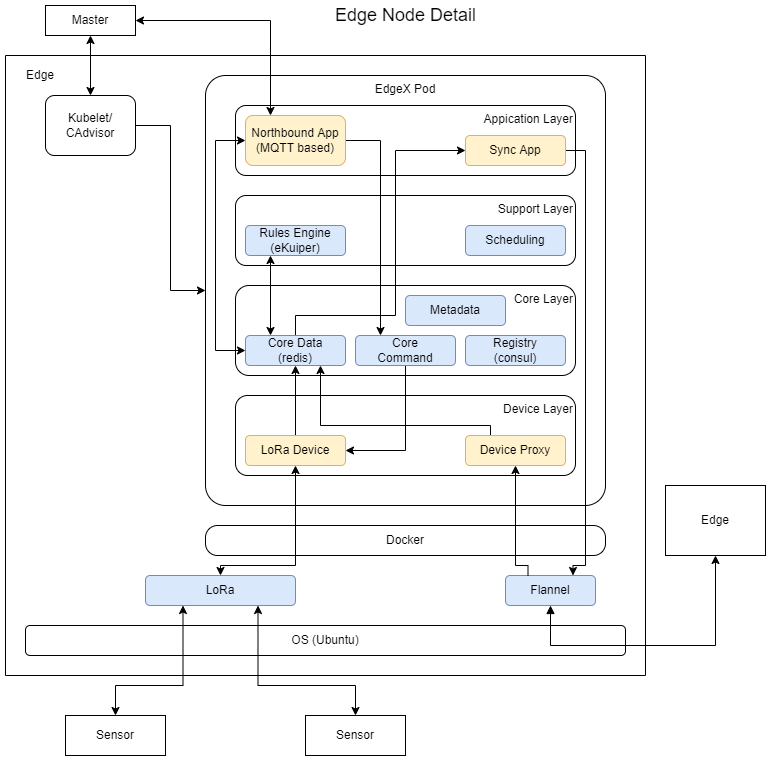 The diagram below illustrates the architecture for data sharing between two edge nodes. (The green and red lines show flows of data originating on the left and right nodes respectively.) The decision whether to share a piece of data and with which nodes is under the control of custom rules configured in the EdgeX Foundry rules engine service. The synchronization application picks up the data marked by the rules engine and forwards it to the appropriate edge node through the cluster network. The shared data is received by the device proxy service, which forwards it to the core data service where it can be processed as a regular event, including such processing as sending commands to local sensors based on the content of that event and configured rules. 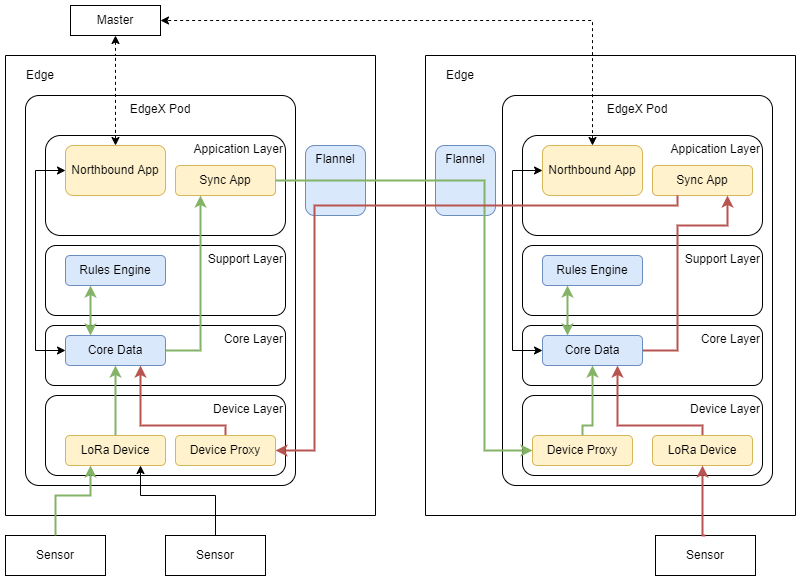 This blueprint describes a self-contained system with the master, deploy and CI/CD nodes running on dedicated on-premises hardware and edge and sensor nodes running on a private network under the customer/user's control. The details of the hardware and network setup can be customized by the user as they see fit.

The table below summarizes the platform for each node in the blueprint.

The specifications above are those used for the blueprint implementation for testing, but other base hardware or OS choices could easily be supported in many cases.

The software components used by the blueprint are listed below.

No additional APIs are defined by this blueprint.

The LoRa device service adds a new device profile to the EdgeX Foundry metadata supporting temperature and humidity readings from the DHT-11 sensor over the LoRa connection, and control of the sensor sampling interval. The LoRa connection parameters (channel, group and station IDs) are controlled via configuration values for the LoRa service.

Hardware provisioning and software management is described in the installation guide. Software is managed using Ansible playbooks and Kubernetes tools such as kubectl via the command line.